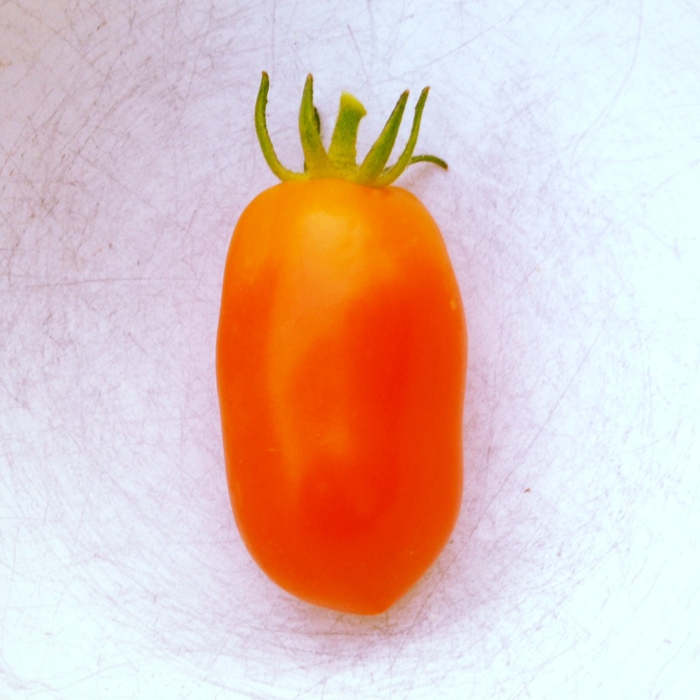 I picked my first tomato of the season this weekend. Which is actually pretty cool because I just planted it last week. I have never (ever) had success with growing tomatoes, so this year I did things differently:
-1- I waited until the plants were on clearance and bought the largest one that already had tomatoes growing on it (Cha-ching! I am guaranteed at least two tomatoes this year!)
-2- I didn’t have any large containers available so I actually planted it in the ground (this is where I probably failed in years past)
-3- I’m watering it like crazy

I bought a Grafted Tomato plant which apparently has unrivaled abilities that outshine a “regular” tomato. They are “disease resistant and have superior growth characteristics.” I’m hoping this also means they know how to fight off the squirrels that will try to steal them from me. To be honest, I had no idea what I was buying, I just knew it was 50% off and Brad Pitt wouldn’t be too upset because the money we would save from growing our own produce would far outweigh the money spent to begin the garden. And I only bought one. Which really makes for an odd garden, especially because I planted it in the middle of the yard. It was the only spot left that didn’t already have “pretty plants” and still receives enough sunlight. Brad Pitt is the only person who seems to care about where I planted my tomato vine but I think he was just irritated because he has to mow around it. Which shouldn’t take a genius to figure out. I put one of those cages around the plant so he shouldn’t have any trouble finding it.

Back to the tomato that I plucked off the vine on Friday. I brought it into the kitchen, but haven’t been able to eat it because its so pretty. I’ve been giving it some thought and today I think I came up with the best plan for my tiny tomato. Brad Pitt has jury duty tomorrow. I am going to pack the tomato in his bag so when he gets to the courthouse he can pull it out and let it rest next to him, just like the guy in Sex and the City that brought different fruits and vegetables when Carrie had jury duty. You know, back when Carrie was dating Berger? I think it will be a nice way to say “hey Brad Pitt! I’m thinking about you!” and I imagine it will be a great conversation starter for him, so he may make some new friends while he is stuck waiting around to fulfill his civic duty.

Okay scratch the plan to send a tomato in Brad Pitt’s bag tomorrow. I just sliced up the tomato and plopped it into tonight’s salad. I couldn’t resist any longer.

4 thoughts on “You say tomato”