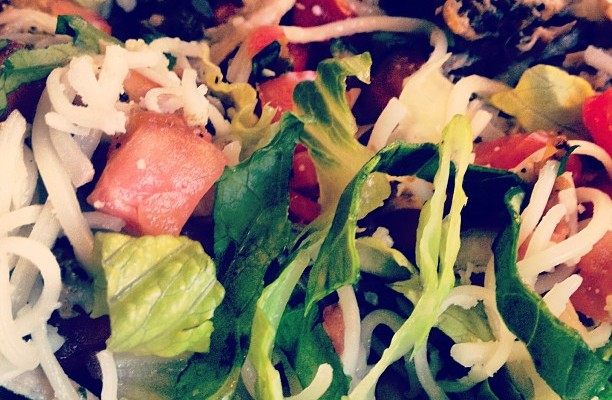 Today I indulged in my Super Secret Single Chipotle Burrito Behavior. For years I gave up on it because I didn’t have the opportunity to eat my burrito alone, Brad Pitt was always with me. So I grew accustomed to ordering a burrito bowl instead and forced myself to forget about the deliciousness a full-on-tortilla-wrapped burrito could bring. One day I was watching the SSB episode of Sex and the City and I felt compelled to share my secret with Brad Pitt. It didn’t seem to bother him, but I still care. I always wait for him to go out of town before I indulge. Today, though, I figured “What the hell, I’m going for it!” I brought home an actual burrito, grabbed a huge mixing bowl, sat across from him, peeled off the aluminum foil and went to town.

First you have to dump the contents of the burrito into the bowl. And it must be a huge bowl. Then you take the tortilla and you rip it into small pieces. This takes awhile because the tortilla is so big. You have to eat a few pieces of it, too, while you rip it apart. Once you have the tortilla ripped into pieces, take your fork and mix everything around. Then you can dig in. I usually sit Indian Style* with the bowl in my lap and I don’t take a breath until everything is gone.

Its really not that embarrassing. But seeing a grown up take a burrito and rip it apart by hand and then eat it out of a huge bowl is not exactly normal. And that is my Super Secret Single Chipotle Burrito Behavior. Which isn’t so secret anymore.

*I was worried that saying “Indian Style” was a politically incorrect term these days, so I Googled it and found out many people use a different term now. So, if you are offended by my comment, you can replace that sentence with the following correction:
I usually sit Criss-Cross-Applesauce with the bowl in my lap and I don’t take a breath until everything is gone.