Last night before we dozed off to sleep, a commercial about s’mores popped on the television and I was struck with a genius idea to improve the campfire dessert: peanut butter. I told Brad Pitt, “You know, I don’t really like the marshmallow part of s’mores so I think it would be awesome to spread peanut butter on one side of the graham cracker and put the chocolate on the other!” He didn’t like my idea, explaining that the marshmallow is “the best part.” (I completely disagree. The only reason I would buy marshmallows is because they are so fun to catch on fire and then twirl around like a 4th of July sparkler – but be careful, they will fly off your stick. I learned that one summer when a marshmallow zipped through the air and hit Brad Pitt square in the chest.* He was fine afterward but the marshmallow was not.)

This led to a heated discussion about cereals and which ones were the best** and how those packages of tiny, individual sized boxes only have two or three really good kinds of cereal and the rest suck and you have to fight with your sibling on who gets what box. But then I said, “Actually I wasn’t really that into cereal for breakfast. I liked eating macaroni & cheese or fish sticks before school. Or leftover dinner from the night before. Especially lasagna.” 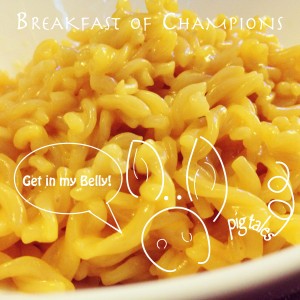 Which is true. And still holds true today. Minus the fish sticks. I haven’t had a fish stick in a very long time. But macaroni & cheese, yes. Leftover lasagna? Hell yes. Other things I commonly eat for breakfast include leftover Mexican food, salami sandwiches, pizza (usually leftover & cold but sometimes a fresh & hot Totinos) and hot dogs with Sriracha. The only “breakfast-like” thing I ever crave would be a Super Sonic Breakfast Burrito. When I realized how many calories were packed into one burrito, though, I broke that addiction and went back to hot dogs.
Brad Pitt eats oatmeal with raisins.
Every.
Single.
Day.***

*Note to my homeowner’s insurance agent: This marshmallow incident was in the woods when we were camping. It was not at home like the firepit incident from the other night.

6 thoughts on “Breakfast is Boring”