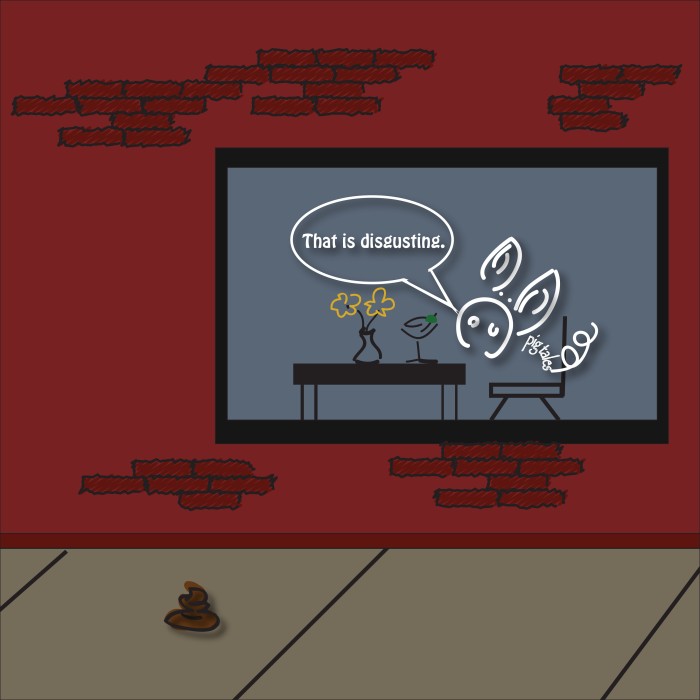 Every now and then there is a turd on the sidewalk and you have to wonder where it came from. Usually (hopefully) its dog poo. I always wondered why someone would let their dog poop on a sidewalk. I was jogging around the Plaza one time and witnessed a shih tzu (ironic?) crap right in the middle of the sidewalk in front of a coffee shop. I was appalled. I was even more disgusted when the owners did not clean it up. I was jogging at warp speed and had to use super human skills to avoid stepping in the mess.

And then we got Penny: aka The Little Monster. Such a sweet dog, really. And one thing I love about her is she will jog with me. No, she runs. All eight pounds of her pulls the leash and drags me through our neighborhood and the Plaza as she bolts down the sidewalk. Until she stops suddenly and shits wherever she pleases. Its like she gets the runners trots. Except she is a dog. And she doesn’t have running shorts to catch her impromptu poo. Nor does she have the mind set to hide next to someone’s home or office building like the chick who was caught on camera repeatedly pooping during her morning runs recently. Nope. Penny just squats and poops right in the middle of the sidewalk. And oftentimes its right in front of a restaurant. Lucky me! Not only do I have to pick up dog poop, but I have to clean it off concrete and its usually in front of a nice big set of windows where people are trying to enjoy a meal. How embarrassing. And, don’t forget, I said she gets the runners trots. So we aren’t exactly talking normal poop here. Lets just say its not easy to leave the sidewalk spotless at times.

So the moral of the story is twofold: When you gotta go, you gotta go. And always watch where you step. You never know who has been there before you.