I have the most bizarre dreams and this week I found out that I talk in my sleep. I had no idea until Brad Pitt whacked me in the back to wake me up because I was freaking him out. (Whack is probably too harsh. It was more of a nudge but when it jolts you awake it feels like a whack.)

Its not uncommon for Anthony Bourdain, Gordon Ramsay or other celebrity chefs to make appearances in my sleep. Bourdain and I hung out one time in my parents garage drinking PBR and Boulevard Single Wide IPA after he taught me how to use a boning knife and challenged me to create a dish out of this funky egg that had a partially grown chicken inside. I had just read Kitchen Confidential and watched a few episodes of No Reservations, so I can only assume that I had absorbed too much Bourdain in a short period of time which led to his appearing in my dreams.

Last night I dreamed that Brad Pitt and I went to a local restaurant. I think it was my birthday because I felt special, like people were there for me but when I sat down at my table no one came to greet me. I waited and waited but nothing. Servers passed by without saying a word. Eventually I moved seats hoping to politely grab someone’s eye, but they still continued to ignore me. By this point I was getting irritated because I really wanted a cocktail and no one was taking my order. An hour passed by and then I lost my cool and started yelling about how crappy the service was. My temper tantrum was interrupted, though, when the guys in the kitchen, including Stretch (the Kansas City based artist and restauranteur) were pulling a whole hog out of a sink the size of bathtub because they were going to prepare it for us. I guess somehow we were able to put in an order of food but no cocktail orders. A whole hog. For two people. But that wasn’t the most bizarre part. The worst part was the hog was so large that no one could get a good handle on it. It was huge and as Stretch hoisted the swine over his shoulder, the slippery pig catapulted over him and hit the ground. There was a huge gasp throughout the dining room and that is when we realized it was still alive and trying to escape. Brad Pitt jumped from his seat and attempted to tackle the hog. At this point in the dream I remember I was afraid to watch because I didn’t want to see anyone take the pig’s life so it could be smoked up for our dinner. The next thing I knew all the kitchen guys were carrying parts of the pig toward the kitchen. Oh! There go the ribs! There is the butt! A huge leg! And the head!

It was so bizarre. No wonder I talk in my sleep. I was probably yelling “Get the pig! Get the pig!” I can only blame the pig heads we saw in the butcher shop at Anton’s Tap Room last weekend: 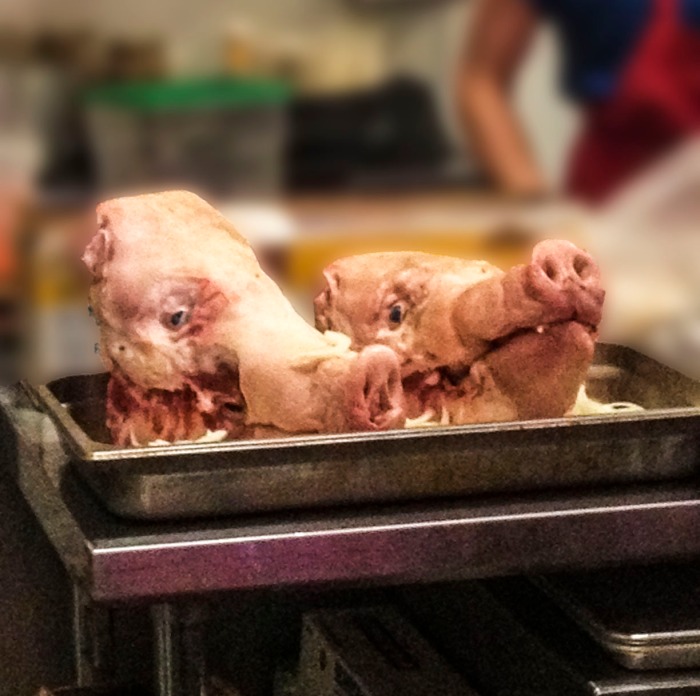 See? Doesn’t it make sense that I would dream about a huge pig trying to escape? And wouldn’t you rather have a dream about Anthony Bourdain than a giant pig? Yeah, I thought so. Me too.

3 thoughts on “The Whole Hog”