About 24 hours ago I drove from Kansas City, Missouri to Danville, Kentucky. Here are a few trip highlights so far:

1. We did not run out of gas. It was a close call. There is a long stretch in Indiana where I swear there are zero gas stations along the highway. Zero. I didn’t get nervous until the light started flashing and I knew Brad Pitt would start to freak out. He always freaks out when the gas tank gets low on road trips. One time I told him I was going to push it to the limit just to see how far we could make it and I thought he was going to throw me from the car and take over the wheel to pull over and hit the nearest gas station. He also did not find it funny when I sped up to get right behind a tractor trailor pretending I was Spy Hunter. He would have so much more fun if he lived life a little more on the edge.

This is where we stopped for gas:

I have no idea if they had fine good, but I do know that we made it out alive. Which leads me to #2 on my road trip adventure list.

2. We didn’t blow up at the gas station. While I pumped gas, Brad Pitt ran inside to use the potty. Two guys on motorcycles pulled up next to my pump and lit up cigarettes. Seriously?!? Why in the world would you smoke next to a gas pump?!? As soon as my tank was full, I pulled away from the pump to eliminate my chances of going up in flames. As I waited on the side of the building, I saw Brad Pitt come out and walk toward the pump. He stopped in his tracks. He couldn’t find me. I truly was in plain sight but he just didn’t see me. I finally flagged him down and when he jumped in the car he said “Oh my God! I thought you ditched me again! And I figured I had no where to run in Kentucky!” So, not only did I manage to save our lives but I was able to pull an unintended prank on Brad Pitt. I have more skills than I realized.

3. I attended the Kentucky State BBQ Festival, listened to some great blues music and ate burgoo. What is burgoo? You will find out soon in my next post. I also chowed down on a super delicious pulled pork sandwich and made friends with Harold, the Boyle County Judge. Not only was he super nice and kept me company while I ate my dinner, but I always figure its a good thing to be on good terms with the county judge. You never know when that might come in handy. 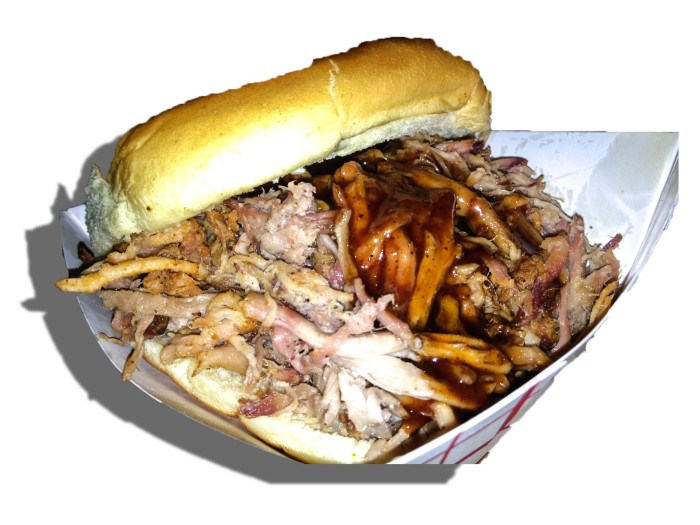 4. We got kicked out of an Applebee’s Talladega-Night-Style. Okay that’s a lie. We did not get kicked out. But we did hit up an Applebee’s. It was after 10:30pm and nothing else was open at the time. The guy at the table next to us almost got kicked out though. That would have been awesome but we left before things got super crazy.

5. We checked into a really neat, historical Shaker Village for the night. Shaker furniture, old buildings, and lots of charm. I kept singing “Shake It, Shake, Shake, Shake It!” in my head the entire time we were there. It was super cool and we managed to share a double bed. That is a success in my book. I’m too accustomed to stretching out in our king size bed at home. Brad Pitt apparently did not care that we were confined to a bed half the size of our normal standards because he still stretched out, which pushed me to the edge of the bed, but I didn’t fall off so, yes, it was a success.

Not bad for one day, especially since 9+ hours of the day was stuck in a car. Today I’m headed back to the BBQ fest. There is a bean eating contest around 2pm. I may enter. I think it would be a real gas to eat a crap load of beans before our hour and a half car ride to Louisville this evening. Poor Brad Pitt. He has no idea what he is in for.

2 thoughts on “Life is a Gas When You’re Roadtripping”