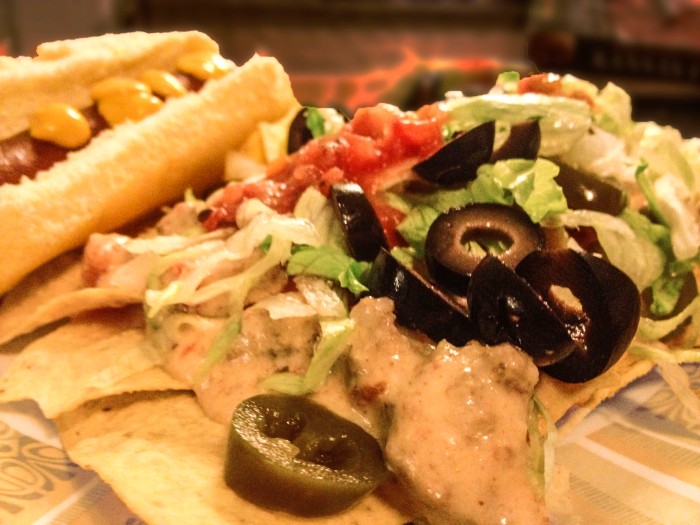 I threw a loaf of Velveeta queso blanco, two cans of Rotel diced tomatoes with green chiles and a pound of browned ground beef into the crockpot.

I figured if we just dipped our chips into the creamy mess-o-cheese it wouldn’t feel like a meal, so I added jalapenos, black olives, lettuce and salsa to the chips and dip to make a substantial plate of nachos. Plus it made the nachos feel healthier. You know, added veggies and all.

And then there were the hot dogs.

I don’t know what sort of magic I pulled on the hot dogs, but they tasted just like the best hot dogs in the world. (AKA: The hot dogs you eat while watching the Kansas City Royals play at Kauffman Stadium.)

I bought my usual Oscar Mayer lean beef franks and simmered them in a pan with some water on medium high heat, adding a few tablespoons of water at a time. And then I looked at my left hand and noticed I was holding a Boulevard 80-Acre, which led to the brilliant idea to splash a little beer in the pan. So I did. When the pan dried up, the hot dogs were ready to go. And they were delicious!

I’m totally going to have a hot dog for lunch today. Its a good thing there was a leftover dog because I don’t want to crack open a beer at noon just to have one hot dog. That would lead to a very unproductive day. Or would it …..

Cheers to the World Series giving me the brilliant idea to heat up a loaf of cheese and splash my dogs in beer. On to Game 2!*

*In case you wondered: I am rooting for the St Louis Cardinals. Given the fact they are from my home state MISSOURI (Yeah! Wahoo! Missouri!!!) I’m obligated to cheer for the red birds.