A few weeks ago I was laying in bed and a huge light bulb went off in my head. I decided to host a happy hour for only friends with the name Katie(y). I became extremely excited by this idea but as my plan developed, a bubble of worry grew inside me: It was sure to be an awesome night, so I kept thinking of more people I wanted to invite. But they had other names … like Amy, Becky, Laura, Megan, etc. When I expressed my concern about excluding some of these mighty fun friends from the Katie-Exclusive-Party, Brad Pitt put it in the best terms possible. He said ….

“Listen, you can’t help the fact their mom’s fucked up and named them something else. Its not your fault. They should blame their mothers. You can’t invite them.”

So, yeah, there you go non-Katie-named friends. That is why you weren’t invited. I suggest you address this issue directly with your mother.

The easiest way to spread the invitation was via Facebook, of course. All I had to do was type the letters “KAT” in my search field and all the Katie and Katy named friends popped up. I put together a group message and BAM! The invite was out. It was fantastic watching the Facebook Messenger update me on who had “seen the message” … Seen by Katie, Katy, Katy, Katie, Katie. I was like “Which one?!? Which one?!?!” It was awesome. 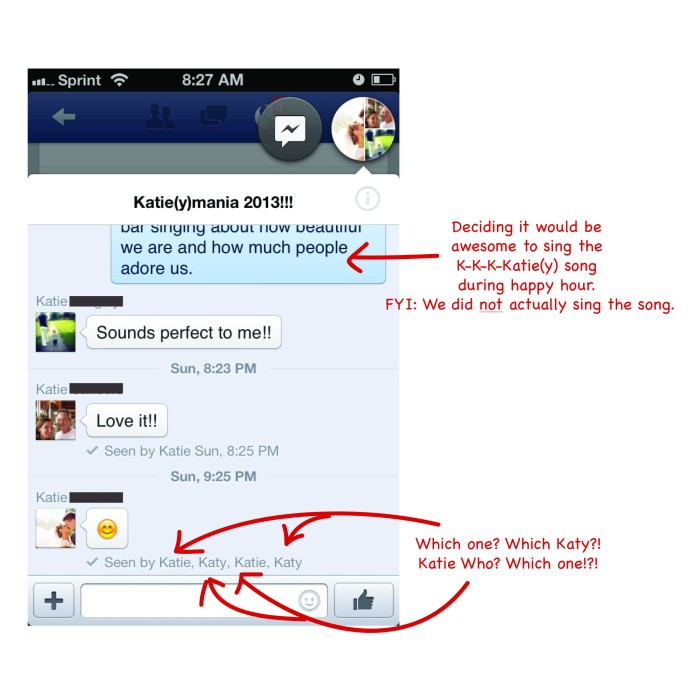 At first I was going to name our Happy Hour the K-K-K-Katie(y) Happy Hour because my mom used to sing that song to me when I was young. In case you have never heard it, here is the song:

(After watching a number of K-K-K-Katie(y) videos on YouTube and hearing “Beautiful Katie(y), You’re the only one that I adore!” my ego has been greatly boosted for the day!!)

Anyway, I was all for calling our happy hour the KKK-Katie(y) Happy Hour but when I typed it out, I had trouble getting past the KKK part. Its not exactly politically correct, you know. So, I quickly decided to forgo that option. Luckily, Katie (which one?! which one?!) suggested Katie(y)mania 2013. That stuck and a few variations took off from there.

All in all, the group started with seven Katie(y)s – including me. As the dialogue between all the Katie(y)s continued, more Katie(y)s were invited. If they were named Katie(y) they were added to the list. If everyone had been available, we would have had close to 15 Katie(y)s at the Happy Hour.

But, life happens …. People got sick. People got stuck at work. People were out of town. We Katie(s) are very busy and important people, so its not surprising that we couldn’t all make the specified date. Which is fine. We are hoping for future dates.

In fact, we thought maybe a night of bowling would be fun. Can you imagine a scoreboard full of Katie’s and Katy’s? It would be epic!!

All in all, it was a great night that resulted in some interesting discoveries.

Here are my Random but Awesome Discoveries from the Katie(y)mania Happy Hour:

And last, but definitely not least – this discovery might have been the best thing that happened all night:

One thought on “Katie(y)mania Happy Hour”