I couldn’t figure out the best way to show you the first sandwiches Brad Pitt and I had in our new town and the (hilariously timed) text message my mom sent regarding said sandwiches, so I am just going to start with the text message: 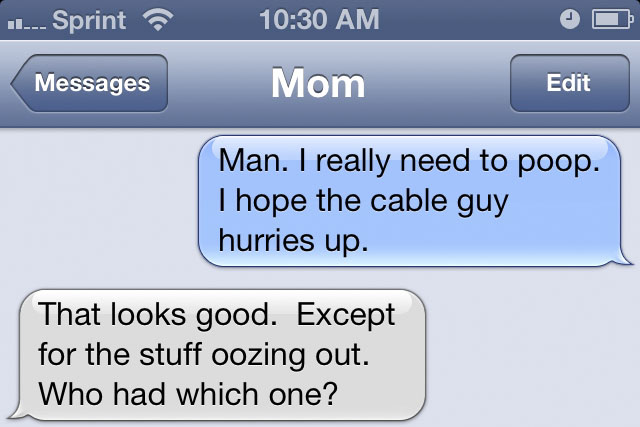 In my defense, I really did have the need to poo. And because I’m such a lady, I was not about to drop a deuce when the cable guy was still working inside our apartment. (Which, I’m actually going to call “our condo” because Brad Pitt’s mom referred to it as a condo last night and we like the sound of condo much better.) So, there I was in our condo, holding in my bowels and sending my mom text messages to pass the time. Apparently she was not paying attention to my incoming messages when she responded to the photos of the sandwiches we had eaten the day before. Which was perfectly awesome for me because I got a good laugh from it and I think it slightly horrified her when I sent her a copy of the screen capture with her response.

“The stuff oozing out” was actually a pesto spread on one of the sandwiches. And it was super delish. Which surprised me because it was from the Italian restaurant in town that also offers taco salads on their menu. As I said in an earlier post, this would normally be a place I would avoid, but given the lack of other options, *, charm and our hunger level we went for it.

I’m glad we took a chance on the Italian Place That Serves Taco Salads. Our sandwiches were really good. Especially the stuff that was oozing out.

*Everything is close. Its a small town. So I’m scratching that excuse from the list of reasons I ignored the red flag and decided it was okay to eat there.

4 thoughts on “The Stuff That Oozes Out”