I’m totally copping out on today’s Taco Tuesday post and writing about enchiladas instead.

Technically, I could write about tacos. I had some this past week. And while it was a new taco to me (because I mixed up my combination of ingredients) it wouldn’t exactly be new to you because I’ve already written about Cali Burrito. Then again, when I lived in Kansas City, I wrote about El Patron and Sabor y Sol all the damn time.

So, maybe I should write about the tacos I had the other day.

No. I’m not going to write about them. I’ll show you a picture, but that is it: 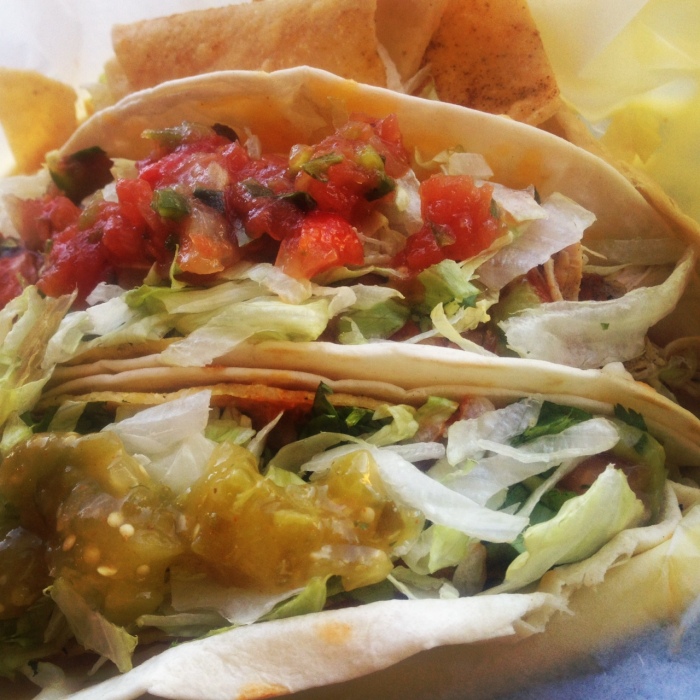 Okay, I’ll say a little something about the tacos.

These are the double shell tacos (in case you are just joining the party and haven’t read my other posts about tacos from Cali Burrito.) Hard corn shell inside a soft flour shell. I think I’m becoming addicted to them. I like the texture. And blend of flavors. A lot. I went with the Santa Barbara which is chicken, lettuce, guac and cheese. Same thing I ordered last time. But this time I remembered I could add ingredients, so I had them throw cilantro, hot sauce and pico de gallo. Then I added salsa (from the aforementioned salsa bar which my mom kindly pointed out to me that I would typically be grossed out by a salsa bar and yes I am totally grossed out at the thought of all those hands and sticky fingers and germy mouth breathers helping themselves to the same salsa that I’m about to devour. But I like salsa. A lot. So I went with it.) The picture above features two different salsas (duh). Both were good. And I like to take my fork and shove the salsa down inside the taco to be sure everything is mixed up nice and properly. I have quickly adopted my own weird ticks at Cali Burrito, much like my bizarre Chipotle eating behaviors.

Oh. Snap! Speaking of Chipotle!!! This is much better than talking about tacos that I’ve already talked about …..

I finally went to Chipotle in Pennsylvania! We set out on our One Way Road Trip to PA on February 19 (I know this because I just looked back at my calendar to figure out the exact date) and because Chipotle is not on every corner in Lehigh Valley like it is in Kansas City

(WTF Pennsylvania!?!? Get with it! People eat Chipotle!!)

we finally, finally grabbed some burrito bowls on Sunday.

It was like …. home. It tasted so good. And I devoured mine in half the time it took Brad Pitt to eat his bowl. I think its because I went with my usual choice (Carnitas) and he tried something new (Sofritas). I was all about mine. And then some. I’m ready to go back.

Oh, yeah. I was going to tell you about enchiladas today. Well, never mind. It doesn’t make sense to talk about enchiladas at this point because we’ve already discussed my recent Cali Burrito and Chipotle experiences in much greater detail than I ever anticipated. So, I’ll save the enchilada story for later.

Except to tell you this: My enchiladas were great.

Brad Pitt did not like what he ordered. He says he is never going back to that restaurant. But he will. He just doesn’t know it yet.

So, other than what little I’ve shared with you, its nada on the enchiladas and a big, fat ….. Happy Taco Tuesday!