Once upon a time (yesterday), I wound up on a never ending one mile jog…..

I used to jog an average of three miles on any given day with ease. And then life happened, shit hit the fan, and I lost my running mojo for awhile. Well, I’m trying to get it back. And by “trying to get it back,” what I mean is I’ve been telling myself “do at least a mile and see what happens.” I figure its better than nothing.

And somehow I’ve been able to tackle a mile or two (not as easy as it used to be, but I’m tackling it) regularly for the last couple of weeks. I started to wonder “when am I going to get my groove back and jog effortlessly for longer distances?”

Well, Stella Got Her Groove Back yesterday. Not effortlessly. And definitely not intentionally.

As I said, I set out for a mile. After mile one, the left side of my left shin started screaming at me. Enough that I had to stop and stretch. But I kept going! Only because I wanted to see where the trail led, not because I had that runner’s high that people talk about. Half a mile later (which I then intended to be my halfway point) my shins were aching and I was further down the trail than I’d ever been. I sent a pity text to Brad Pitt: 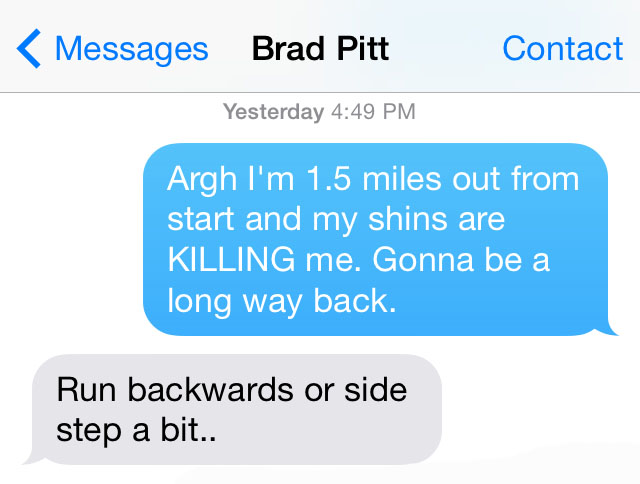 Run backwards? What the fuck is this? Ferris Bueller’s Day Off? Guess what Brad Pitt: Putting it in reverse does not solve the problem.

Ignoring my pain, I forged ahead.
Found the bridge.
Crossed the bridge.
Stopped to stretch shins again.
Got stuck walking behind a young couple who was walking the same path, holding hands and every few steps stopping to lock their lips together. Maybe they were giving each other mouth to mouth resuscitation because they were in as bad of shape as me. But I was pretty sure that wasn’t the case. So I pulled out my trusty iPhone and posted something about being stuck behind people making out and needing to run faster so I could pass them.

Karma apparently did not agree with my post. I know this because I quickly realized I was lost. And stuck jogging up a really steep hill.

By this point I had logged at least 2.5 miles. If I turned back and retraced my steps I knew I was in for a least a five mile run. FIVE. I needed a better solution. I saw a random rich guy standing in his garage, next to his shiny Mercedes and thought “rich people probably don’t kidnap blonde girls who are out jogging and got lost” so I walked up his driveway and explained that I was way off the trail and wondered how to get back. According to Random Rich Guy I had two options: retrace my steps (no thank you, but at least it was downhill) or keep going uphill and eventually come across a field that I could jog down and reconnect with the path.

Bingo. Found the field! Began jogging down the hill! And then I was attacked by the largest hawk you have ever seen in your life.

Okay. Not really. That didn’t really happen. But a super huge hawk did fly over me and I thought “Oh, yeah, great. Karma is a real bitch.”

So, I made it back to the trail [insert a hell yes!] and then realized I was not even close to my “usual” halfway point [insert a hell no!] and I was still on the “wrong” side of the creek. I so badly wanted to be on the “other” side. Mainly because it is flat. If I stayed on the current side I had more hills to climb before I eventually made it back to my starting point.

Every jogger I passed at this point made me want to shout out “Turn Around! Don’t Go That Way! The Bridge Ahead Leads to Nowhere!” but I kept to myself. Mainly because I needed to conserve my energy to keep moving forward.

Keep running. You’ll get there faster.
Oh my God. Park closes at dusk! What time is it? I’ve been here forever! I’m going to be stuck in the park! I’m not running fast enough!
Oooh, that’s pretty! No! Don’t stop for a picture. Run, bitch, run.
Bridge! Bridge to the “other side!”

Ohmygod. Ohmygod. I’m on the other side! Finally!! Ohmygod!
Wait. That means I’m only at my usual half way point.
FML.

At about this point in time, Pandora started playing “Ain’t No Mountain High Enough” and I thought I was going to lose it.

But, I kept running. And the thoughts kept flowing…

This sports bra isn’t cut out for jogging this far. Boom shocka locka. Boom shocka locka.
Heh. One mile. Maybe two. [mimicking my own thought process] I really screwed the pooch on this one.
Whoa! A turkey! Why is he running so fast? I can’t get a picture of him if he runs that fast.
That guy looks like my Dad! Why is my Dad here? Oh my. I’m hallucinating now. A turkey and my Dad. Who is also kind of a turkey. Hmmmm. What does this mean???
Garmin watch! Don’t you dare stop working. I deserve credit for this shit. Turn back on!
Oh look. There is the girl who told me about the bridge. The bridge to nowhere! Be nice. Be nice. Be nice.
Oh my GOD! The end! I made it!
Wait. Four? Only four miles? 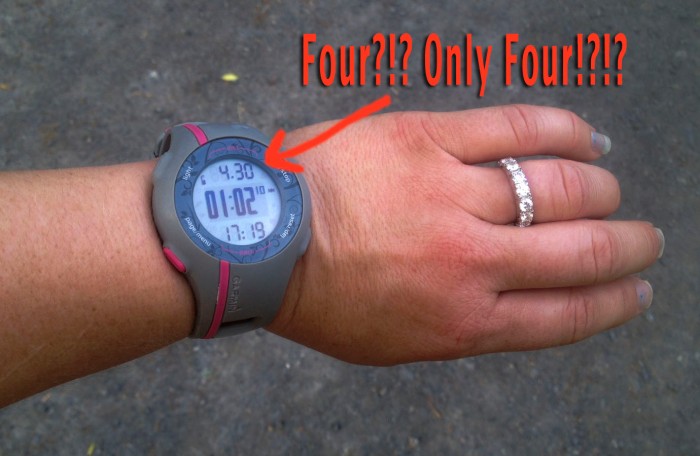 This is bullshit! That felt way more like ten miles.

And that is how I wound up on a never ending one mile jog yesterday.

2 thoughts on “The Never Ending One Mile Jog”