Maybe its just me, but I’m not exactly comfortable allowing other people to handle my phone. Don’t get me wrong, I’m all about “hey check out this photo” and letting someone briefly hold my phone while they take a gander. But, giving someone free range to open apps, add their own contact info, manipulating various screens …. No. I just can’t do it.

So, when Brad Pitt and Chad, a new friend from our local bike shop, exchanged contact info recently and Brad Pitt allowed him to handle his phone, I was silently freaking out inside.

Technologically, I pretty much understand how things work in the iPhone world. But, sometimes there is just that little something, a surprise, a quirk, I don’t know, just something that can go wrong. Like, what if syncing contact info also accidentally shared your other contacts, or passwords or entire camera roll?!? That would not be cool.

Brad Pitt told me to stop freaking out and I somehow managed to let go of my inner-iphone-OCD-worries as the day continued. By the next day, I had pretty much forgotten about the incident. Until I was squeezing myself into a new bathing suit and after inspecting myself in the mirror, I snapped a shot of myself* and texted it to Brad Pitt.

Recognizing both my Italian and Polish heritage, I referenced both in my accompanying message:

Everything was good in the ‘hood and I kept on with my day, chuckling at my witty sausage references. Until I got this response: 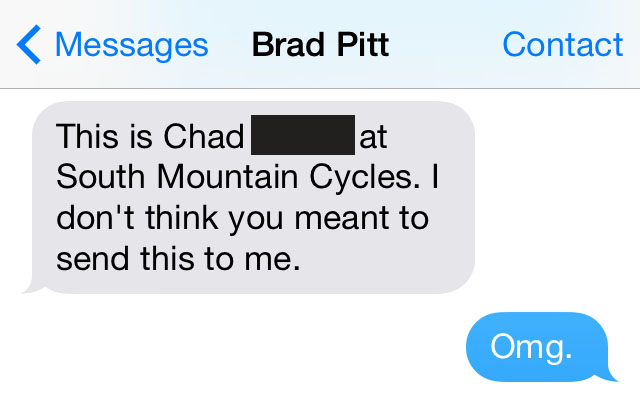 As you can see from my reply, I was in a state of oh-shit-ness.

I sat there, slightly dumbfounded, trying to figure out how in the world my stuffed sausage swimsuit message went to the wrong person. I eventually decided there was a 60/40 chance that Brad Pitt was trying to pull a fast one on me. So I called and interrogated him at work.

And then I sat on my bed for about 20 minutes pondering the probability that my bathing suit clad body photo truly did go to the wrong person. I called my mom and asked if she knew anything about this situation (hoping that Brad Pitt had, indeed, pulled a prank and felt so proud of his feat that he had to share the news with someone who would appreciate me getting pranked.) She had not spoken with him and was not aware of the situation, but found my situation to be hilarious.

Eventually, after searching through every contact in my phone and determining that Chad’s number was nowhere to be found, I determined that it was technologically impossible for my text to have been received on his end. Which, of course, meant that Brad Pitt was trying to prank me.

I had news for him. I’m the prankster in this relationship. So I waited and pounced at my opportunity to retaliate when I got a message from him later (pretending to be Chad again) with an invite to ride that evening:

I was 100% certain Brad Pitt was trying to prank me, so I figured responding “as him” with “massive hemorrhoids” would let him know his gig was up.  So, although he got me really good earlier in the day, I still retain the highest rank of prankster in this relationship. And I proudly sported my stuffed sausage swimsuit body around the pool later in the day.

*NOTE: The swimsuit image has been censored for your benefit.  Your eyes most definitely do not want to see something that resembles an Italian or Polish sausage stuffed into a polka dot Old Navy one piece bathing suit. And, for that, you are welcome.