Remember when I took my nephew Charlie to the T-Rex Cafe? We both had so much fun that neither of us ever stopped talking about it. So, it only made sense to go back and bring more people to share in the fun.

So, today Charlie, Emma, my Seeester and I met up at the restaurantsaurus for lunch. Prehistoric Pizza, Lava Me Tenders, lots of dinosaurs and fish were on the menu.

We walked all over the restaurant checking out the animated dinosaurs before and after our meal. Tyrannosaurus Rex, Brontosaurus, Triceratops, you name it, they have it.

Before we left we took an obligatory potty break and that is when I found what had to be the only true, prehistoric fish in the restaurant’s aquariums: 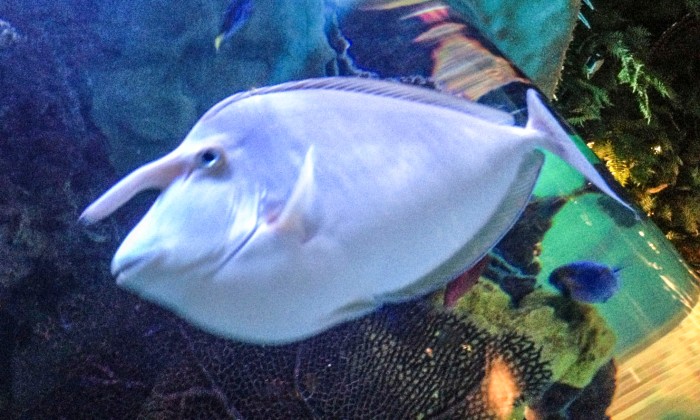 Seriously. Have you ever seen a fish that looks like this??? Um, look at it. When I was around the kids, I kept saying “Look guys! It has a nose!!” But now that I’m home and really looking (staring) at the photo, I can’t help but think it looks like something else. Are you following me here???? Look at it. I mean look!

And his wish was granted.

So, the lesson learned from this trip to the T-Rex Cafe: Never play the “Would You Rather” game unless you feel very comfortable with your answers.

2 thoughts on “Prehistoric Would You Rather”